Before raising any concerns about speech and language development, you may want to learn about the milestones that a child should be reaching at each age. Keep in mind that children develop at their own rate and they may not have all the skills until the end of the age range. 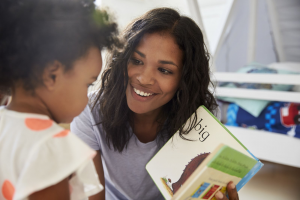 Birth to One Year

One to Two Years

From ages one to two years, your child should be using lots of new words and using p, b, m, h, and w in words. They should be able to start naming pictures in books and asking questions like “What’s that?” They should be putting words together, like “more juice” or “mommy book.”

From ages two to three, the child has a word for almost everything, using words like in, on, and under. They should use two or three words to talk about things or ask for things. K, g, f, t, d, and n should be used in words. People who know your child should be able to understand them.

A child aged three to four should be answering who, what, and where questions and asking when and how questions. They should be saying rhyming words and pronouns like I, you, me, we, and they. Plural words should be appearing in their speech. They can put four words together, even if some mistakes are made, like “I goed to school.”

From ages four to five years, a child should say all speech sounds in words. They may make mistakes on harder sounds like l, s, r, v, z, ch, sh, and th. Your child should be able to say names letters and numbers, tell short stories, keep conversations going, and talk without repeating sounds or words most of the time. They should know how to respond to the question “What did you say?”

To learn more about the speech-language milestones your child should be reaching by age, visit the American Speech-Language-Hearing Association here.

SpeechEasy is a combination of proven technology and techniques which can be used to reduce stuttering. Worn in one ear and similar in appearance to a hearing aid, SpeechEasy has helped thousands increase their ability to communicate effectively and confidently. The program that comes with every SpeechEasy is supported by a team of fluency professionals who truly care about your success. Contact us today!

Limited time: EVERY SpeechEasy model is on sale!